Texts by Karmapas of the Karma Kagyu since 1100

The 25th of August 2017, the translation project “Translating the Karmapa’s works” was announced at Karma Guen, Spain, in the blessing field of HH Karmapa Thaye Dorje, Nedo Rinpoche and Lama Ole Nydahl, as well as the founder of Karma Guen Pedro Gomez. The group of translators and volunteers behind this project has already shared a lot of ressources. THANK YOU!

And it is through the list of the 1369 texts (https://www.translating-karmapas.org/all-works/ ), that they presently and physically have in their custody, that it is possible to see, that THREE of THE KARMAPAS have expressed special interest in the two aspects of Mar-Ngok tradition, namely Hevajra (9 deity practise) and Nairatmya (15 deity practise): the 1st, the 3rd and the 6th Karmapa.

As of 25th of August there is 15 texts on Hevajra and 2 on Nairatmya.

Also it is interesting (see the Schemata over differences), that the 1st and the 3rd Karmapa uses the typical Karma Kagyu way of writing Hevajras name: “dgyes pa rdo rje“, where as the 6th Karmapa seems to use the Mar-Ngok way of adressing Hevajra, namely “dpal kyai rdo rje” (or “dpal kyei rdo rje“).

It is also worth mentioning, that the texts do not all deal with the two practises emphasized here, namely the Hevajra (9 deity practise) and the Nairatmya (15 deity), but there are texts about 2-armed Hevajra (Hevajra Sahaja), and there are also 5 deity practises (Five-form Hevajra) etc.

It is also worth mentioning, that besides the Karmapas, which the current initiative at the Karma Kagyu center in Spain is centered around, that the 4th Shamar Rinpoche (1453-1524) was a great authority on Hevajra and Nairatmya. The 4th Shamar Rinpoche is part of the Mar-Ngok Yab-ka transmission lineage. He is the 21st lineageholder. The 4th Sharmapa wrote many commentaries on the two practises as well as on the Tantra.

Note: These excerpts from “Translating the Karmapas Works”-list was taken the 25th of August 2017. There may be made changes on the original list since then.

Texts by Drikung Masters since 1500

​As a prelimanary note it is worth mentioning: In the lineage prayer of the Hevajra (9 deity) practise, there is all in all 39 lineage holders. Of them, the 12th one is Ngok Chöku Dorje. After that there are 7 Ngok Succesors. From that the lineage goes to the 21st lineage holder, the 4th Shamar Rinpoche (1453-1524) and from him to the 22nd lineageholder Khenchen Sherab Palden, the abbot of Shamarpa’s monastery, Yangpachen. It is from this abbot, that the 17th Throneholder of the Drikung, counting from Jigten Sumgön as the 1st Throneholder, the great Gyalwang Rinchen Phuntsog (1509-1557) recieved the transmission of Hevajra 9 aspect, the middle long practise (drub.thabs).

Since then several Kyabgön Chetsangs and Chungtsangs have, next to their role as Drikung lineage-holders, held the transmission of the specific Hevajra 9 deity middle long practise. The 38th lineageholder of this Hevajra transmission is the 6th Chetsang Rinpoche, Shiwä Lodro (1886-1943), and the 39th lineageholder is H.E. Thritsab Gyabra (1924-1979). It was Thritsab Gyabra, who passed all the Drikung transmission onto the 7th Chetsang, the 37th Drikung Throneholder, Thrinley Lhundrup, but also the Hevajra 9 deity middle long practise was passed onto H.H. Drikung Kyabgön Thrinley Lhundrup.

Among these Drikung Masters, the 1st Chungtsang, Rigdzin Chödrak (1595-1659) not only held this specific Hevajra 9 deity practise, which is the main fokus of this mar-ngok transmission, but also wrote a practise text on a different from of Hevajra, a two-armed form, called Co-emmergent Hevajra.

There are specific differences in the build-up of the Kye-rim. In essence all Hevajra practises are the same, and in fact all buddhist practises in their essence are the same. None the less, there is a richness in the skillfull mean, given by the Lord Buddha, and the ones that have upheld the Buddhas teachings. And there is a value in appreciating these differences, while remembering the mutual essence.​ 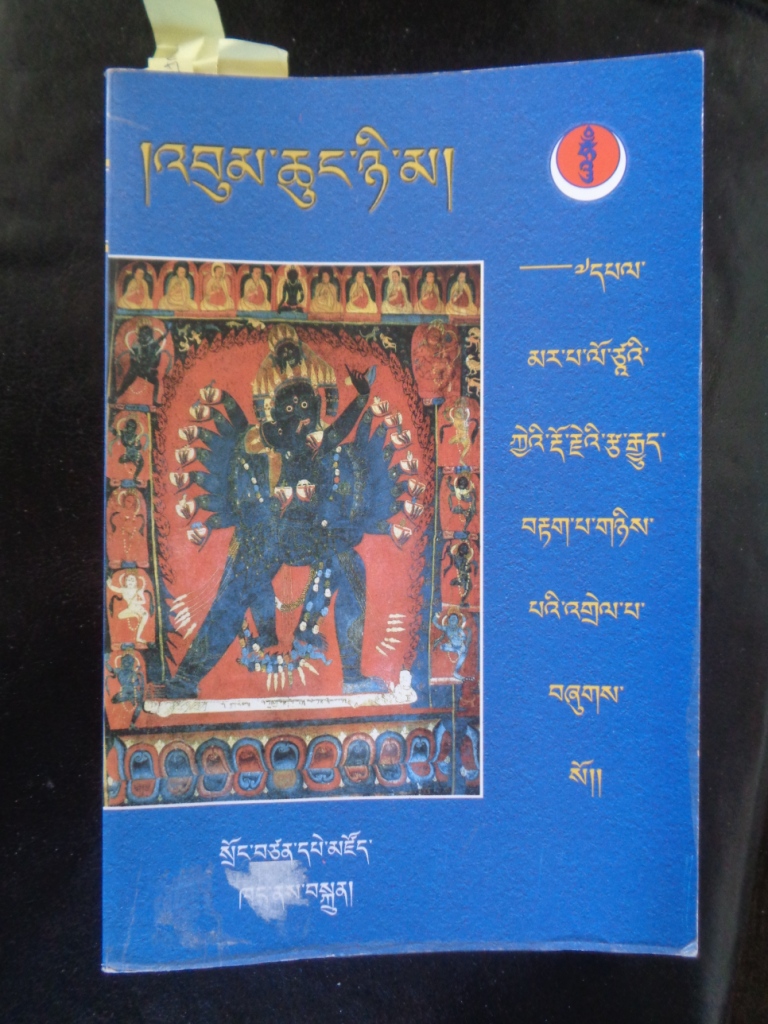 Note: This book is published by Songtsen Library, Dehra Dun. It can be aquired through them. See also the facebook link.

In the future more will be written about the TEXTS on Hevajra, Nairatmya and the Hevajra Tantra composed by THE GREAT DRIKUNG MASTERS​ (25th of August 2017).

Publized 25th of August 2017: Compiled and edited by Carl Djung (Karma Könchog Dorje), based on memory. I excuse all imprecisions and mistakes. It is written with the wish that it may inspire.​ 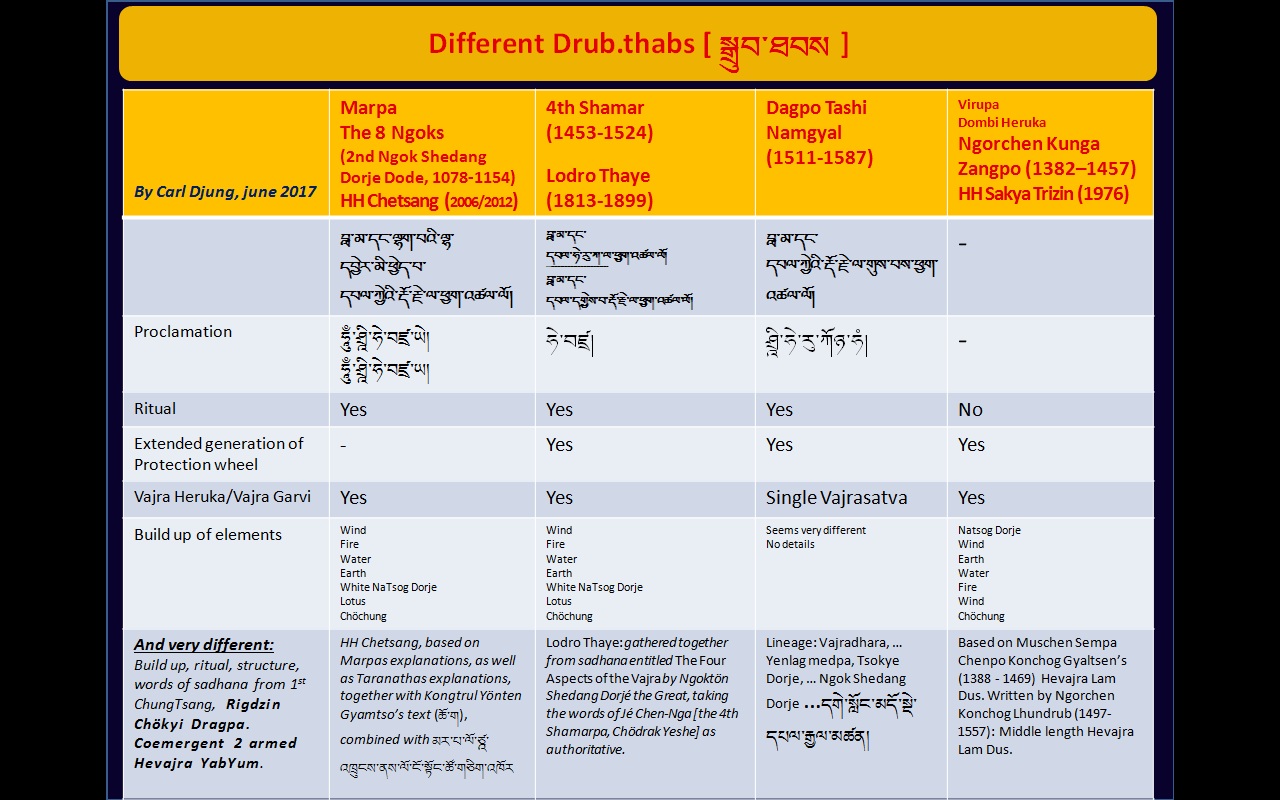 Schemata over PRACTISES of the

Mar-Ngok-tradition: The shorter, middle, long versions of practise on Hevajra and Nairatmya 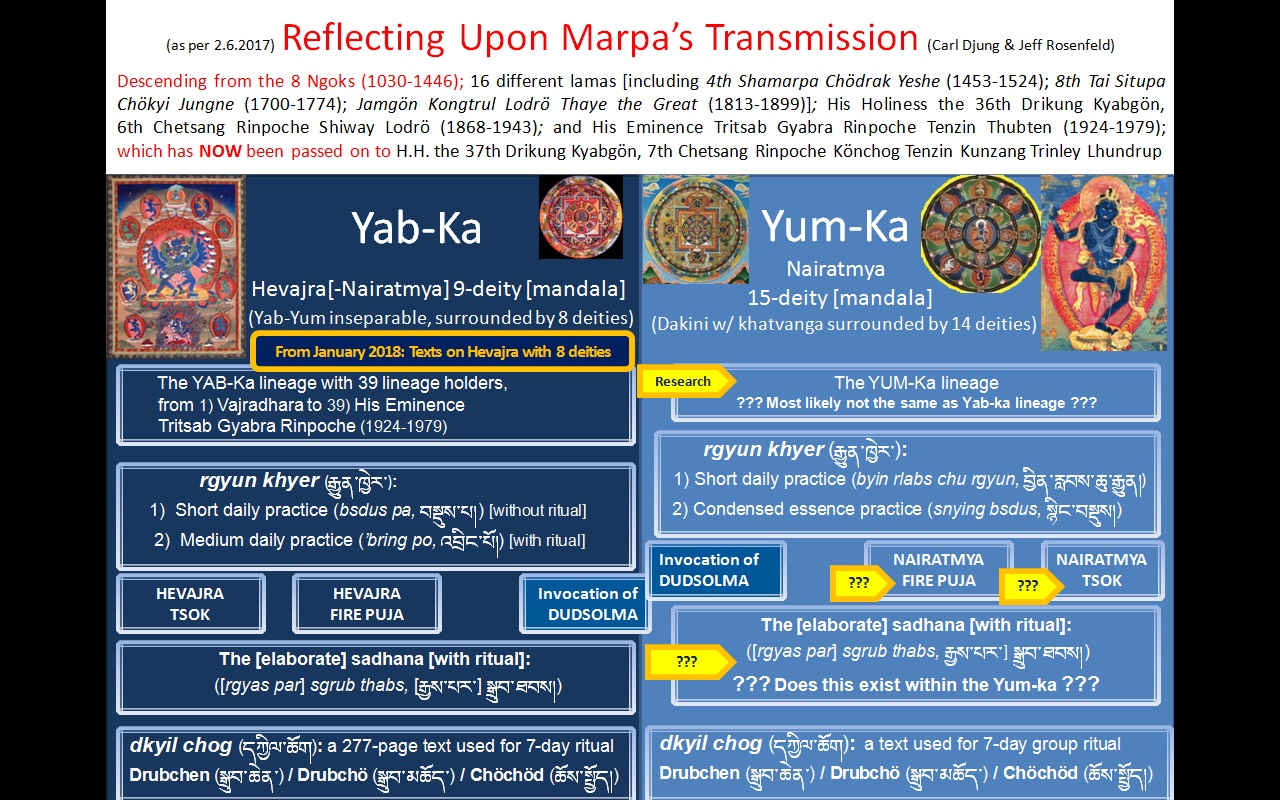 http://mar-ngok.org is owned and operated by a single private person, which is pupil of H.H. Drikung Kyabgön Thrinley Lhundrub.

The views and opinions expressed on this website are purely those of the authors. We DO NOT claimor appear to be experts. We simply wish to benefit in a manner that is constrained by our abilities and our ressources.

This site does not – to our knowlegde – contain any content which might present a conflict of interest, or use information that is connected to any copyright-issues in a normal competitive marked-context. This site is non-profit based and is not driven by any competitative or customer-oriented motive. This site makes no representations, warranties, or assurances as to the accuracy, currency or completeness of the content contain on this website or any sites linked to or from this site.

P.S. This website is focused on a very narrow field of specific practises among the vast richness of the Vajrayana and Buddhist Tantra. Totally aware of that, and aware that all what is mentioned here on this website is indepted to and rests on the FOUNDATION of the DHARMA from LORD BUDDHA SAKYAMUNI, the holy one from the Sakya-klan. Everything on this website rests on the Buddha Dharma in its whole, with the three Yanas: Hinayana/Theravadin, Mahayana and Vajrayana. Also we are aware of the manifolded Dharma-activity in all the various traditions of the Buddha-Dharma situated and having its on-set in different traditions, different practises within the Buddhist richness, and having a modern or a traditionalist approach. IN ALL THIS WE REJOICE, AND FEEL THANKFULLNES.

P.P.P.S. And as something very important, we at this web-site are moved by and inspired by, that these practises are still connected to an both ANCIENT and also LIVING TRADITION of TRANSMISSION, meaning, that the understanding and benefit/realisation of the practises only comes by meditation (training) and daily life awareness (more training), and not just through mere logic and study or just “one-time-reading” and quick “Aha-experiences” and “momentary” “deep insights.

From this also follows, that the doing of the practises mentioned here in this web-site-univers, and even the study of the texts, actually need three prerequisites and an additional essential pre-requisite.

The three often mentioned prerequisites are: Wang (empowerment), Lung (reading/permission), Tri (explanation). And the essential prerequisite is ofcourse, a qualified Vajramaster/Lama/Guru/Spiritual Guide, and also connected to that, and in that blessing, some Vajra brothers and sisters, who one can share knowlegde (not experience) with concerning the “how to do” the practises, the rituals and meditations.

Texts by Ngok Masters since 1100

Marpa (1012-1097), the great Lotsawa, had four pupils. One of these pupils shone like the Sun over the Himalayas and far beyond. That was Milarepa, the heart-son that passed on most of what we today recognize as the Kagyu tradition. Of the remaining three pupils there is one who also left a legacy. He was said to be: “Inclined to give harmoniously flowing and ample explanations, like pearls of a necklace.” His name was Ngoktön Chöku Dorjé (1036-1102). Like one now living Dorjé Lopön said: “… Wonderful … this … reviving [of the] Ngok lineage.” … “…[In the Kagyu lineages] it was a bit overshadowed by Milarepa [and his] life story .. It is exactly Ngok who continued [the] lifestyle of Marpa – living family life and keeping teachings.” It was Ngok Choku Dorje who continued what Marpa wished to start – a family lineage. Marpa and Dagmema had a son they named Dodé who was meant to be the primary heir of Marpa’s lineage, but obstacles prevented this. So later when Ngok Choku Dorje had a son, he named him Dodé. The full name of his son was Ngok Shedang Dorjé Dodé.

Marpa declared that the descendants of Ngok Chöku Dorjé would be blessed by Naropa for seven generations, and Chöku Dorjé passed the instructions he’d received from Marpa on to his son, Ngok Dodé (the first of the seven). Some miscount the prophesied seven generations of Ngok lineage holders as starting with Chöku Dorjé himself, but in fact the counting starts with his son Ngok Dodé, the first descendant. There were 8 Ngokpa Kagyu lineage holders in total (i.e. Chöku Dorjé himself, and then 7 after him starting with his son)! “The embodiment [and last] of the lineage of the 7 successive Ngoks” was Jangchub Pal (1360-1446).

In general, the tantric teachings of Marpa are divided into two types – the so-called “shegyun” (bshad brgyun) or “explanatory stream” and the “drupgyun” (sgrub brgyun) or “experiential stream.” The shegyun refers to the formal teachings on the theory, ritual details, and symbology in the tantras while the drubgyun contains the essential instructions that are needed for experiencing the attainments taught in the tantras. [Sometimes the terms shegyu (bshad rgyud) and drubgyu (sgrub rgyud) are used].

The 8 Ngoks of this family lineage passed on the shegyu and drubgyu of the “Seven Mandalas of Ngok,”, (i.e. 7 deity mandalas central to Marpa and the Kagyu Lineage). Two of these deities were Hevajra and Nairatmya. Along with many others, Ngok Jangchub Pal gave the empowerment of Hevajra Yab-Yum to the Drikung Kagyupas. It is said that when the empowerment was completed, flames blazed up from the sand mandala. All of these details are not so well known.

Many of these Ngok-masters have written texts about Hevajra and Nairatmya, as well as the Tantra it self. One of the very productive ones was Ngok Chöku Dorje’s son, Ngok Shedang Dorje.​ Later we will try to compile a list over these texts, and a short indication of contents.

H.H. Drikung Kyabgön Thrinley Lhundrup has used some of Ngok Shedang Dorjes texts as primary source for the compilations His Holiness has completed since 2006.

FAMILY TREE OVER Male members of the NGOK Family​ 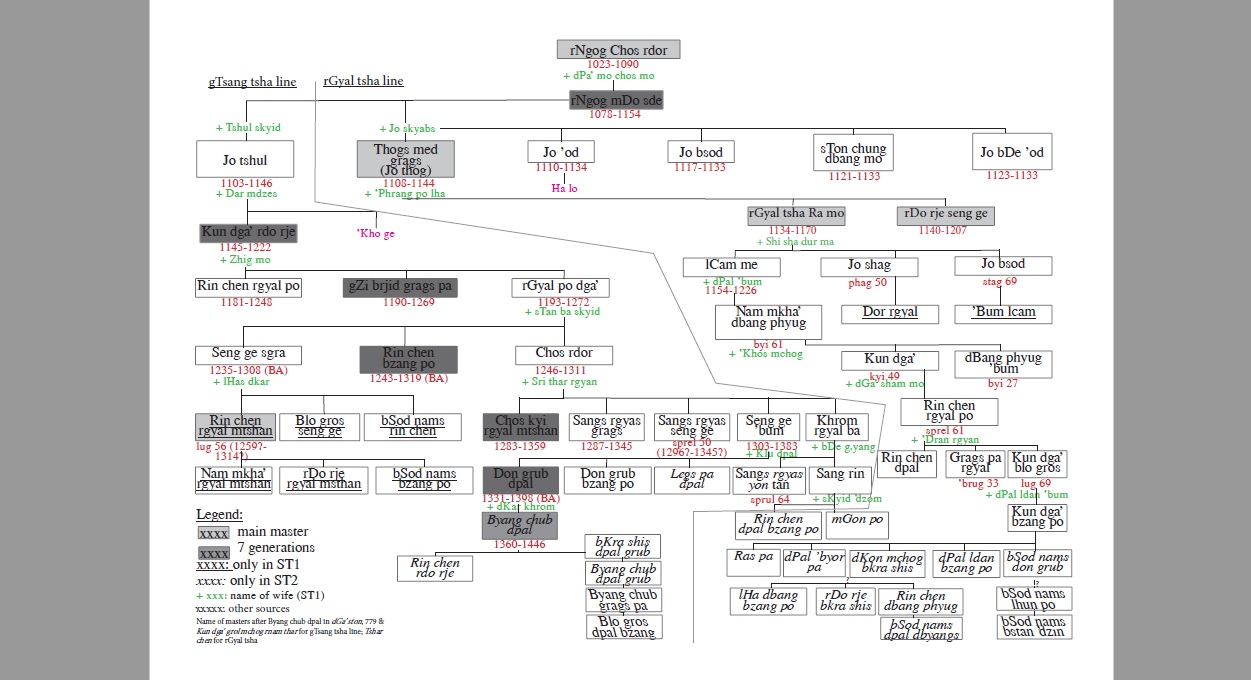 ​Please notice with regards to LINEAGE, that there is “high-lighted” (with dark-grey) 8 Ngok Lineage holders, it is Marpa’s pupil Ngok Chöku Dorje, and then 7 successors. The 2nd last that is “grey-marked” is “Ngok Dundrub Gyal” (1331-1398). None the less, in the specific transmission, which has reached H.H. Drikung Kyabgön Thrinley Lhundrup,  the 2nd last Ngok lineage holder is Ngok Sangya Yönten, which can be seen in the same “row”, but another coloum of the family-tree.

Note: This “family-tree” of the Ngok-family, and the showing of the Ngok lineage holders, was published in 2016 in Marco Walther’s article about ‘Ngok Kagyu pa’, and later worked on by Cecile Ducher during her Ph.D. work on the Ngok connection to Kagyu Ngagdzö (planned to be completed by autoum 2017, and defended december 2017). This image is from May 2017. There is most likely made changes to this since then, by especially Cecile Ducher.